When I look at the things I rely on, Google Photos is one that started out so convenient (“turn on photo backup?”), so well-done (“look at this video we made showing memories from the first three months with your newborn”), that it was easy to lose discipline and let it manage everything. Eventually I had years of photos stored there that I didn’t have anywhere else. Part of the problem is that cell phones make it so easy to take a bunch of pictures–it’s too much work to go through and organize them when Google Photos can do it for you. Then you can just search for “Venice” or “Porsche,” and it can find what you want better than if you tried tagging everything yourself. Does an adult with two young kids have time to set up OCR to extract text from document pics, setup tensorflow to tag people and objects, borg backup to some offsite location, etc.? Nope.

I get worried when I read those stories online about people having their google accounts suspended for no obvious reason and with no recourse. That wouldn’t be a sad way to lose your photos and videos. I had previously used OneDrive for photos and videos, but I hit the 100 GB storage limit and was morally opposed to buying an office subscription to get it to 1TB. Just let me buy storage a la carte!

Anyways, the first part of photo storage independence would be downloading all the photos to local storage on my computer. Theoretically, I have enough space on one or two of my 1TB SSDs, but it would have been really tight and I wanted to consolidate everything to one place. (I was also looking for a project). So I decided to buy two 8TB WD RED NAS drives, which I would plug into this computer. I’m planning to set them up in a software RAID1 configuration for a little more durability.

So, I didn’t see any easy way to download photos from Google Photos. I saw a tool online that you could authorize to use APIs to do it, but I was a little worried about downloading a lot through that tool in case it flagged my account. There is a built-in Google Takeout tool that lets you download all your history, so I tried that. I chose to have links to zip files emailed to me and to split the zip files every 2 GB. I had like 60-70GB of photos/videos, so I was expecting like 30-40 links.

The next day, I got an email with about 185 links of 2GB files. I downloaded about 10 of them and then gave up. I’m not sure how the metadata or whatever was going on could take up that much extra space. I looked in one of the files and it had a bunch of JSON files and the files were from different years, so it didn’t seem like there was an easy way to select what you want.

Exchanging money for convenience, I upped my Google One account storage limit from 100GB to 2TB and then re-exported to Google Drive. That was easier, then I just needed to get the Google Drive sync tool to download the ten-or-so 50GB files. I probably could have just selected 50GB links with the email option in retrospect. The Google Drive sync tool doesn’t know how to resume failed downloads or pause/restart, and the bandwidth download cap feature doesn’t work. So it was really painful watching that try to download everything, and thankfully my ISP has suspended data caps during COVID. OneDrive was comparatively much easier, but it was syncing smaller files (individual images/videos) so it’s not an equal comparison.

I ordered my two 8TB WD RED NAS drives from Amazon in “frustration free” packaging without thinking twice about it, but in hindsight, that should have been a red flag. Here is how they arrived: 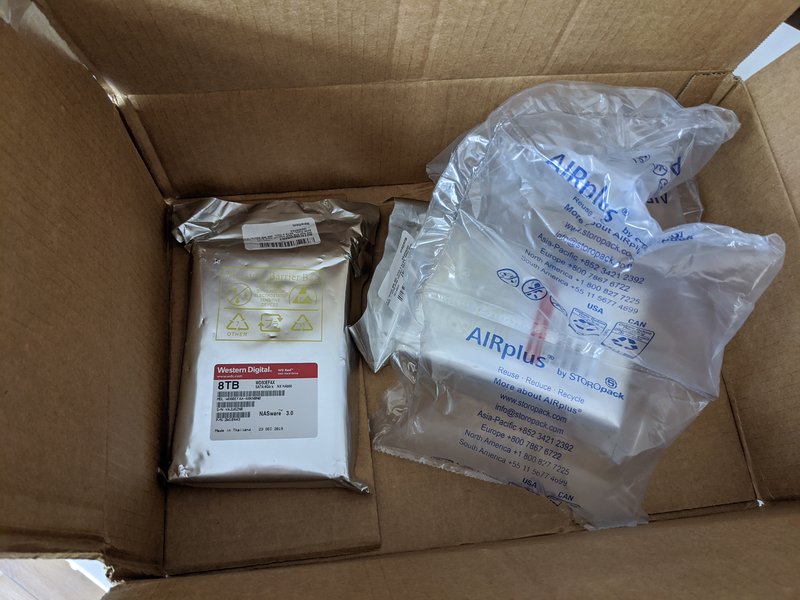 If you can’t see it, there are holes poked in the anti-static bags–probably from the drives hitting each other or other things… Anyways, I decided to return those without opening them and re-ordered through Newegg. Hopefully those will turn out better. I’ll continue the story in part 2.