Yesterday, I installed Fedora Silverblue into a KVM-enabled qemu image from my GNU Guix desktop. I was attracted to the immutable design which is fairly similar on the surface to how GNU Guix works. Under the covers, it’s a lot different, but I thought I’d go over my initial impressions.

Fedora Silverblue is distributed with an ISO image which boots into a graphical (i.e. GTK) installer. It’s one of the shortest and easiest Linux installs I’ve done. That said, I didn’t have to worry about any sort of hardware compatibility given I was running it on virtual hardware. Because the OS runs on an immutable image, there weren’t many options in the installer with respect to choosing initial software.

When you boot in and take a look around, it looks like this: 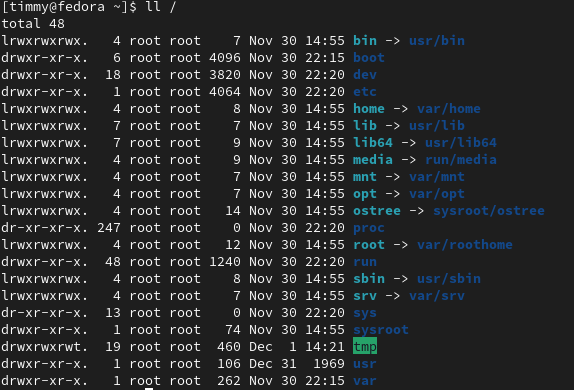 Basically /var and /etc are writable. /home and /root are moved inside /var. Binary directories are moved to /usr. See also: TheCaseForTheUsrMerge.

Here is the filesystem layout.

The /usr directory is mounted read-only. The binaries there basically come from OSTree. There are three ways to install software:

While it might be confusing to average users to have at least 3 ways to install software, they all have their own pros and cons, so I appreciate having the flexibility to make my choice. I think they should change the default behavior of rpm-ostree install in non-server environments to run rpm-ostree ex apply-live to avoid the reboot. I feel like they should be able to figure out how to get systemd to restart the services.

Since managing installed software is a large part of the operating system experience, you might wonder how these three options compare to GNU Guix. Guix is fairly similar in that it has a read-only/immutable software partition. While Silverblue uses flatpak and toolbox for library conflict resolution, Guix can install conflicts side-by-side due to the way it structures the file system. Probably best explained like this:

So ar might use glibc-2.31 but some other package could use it’s own version. Guix is smart enough to share the same /gnu/store version if two packages use the same version. This way conflicts can be resolved without containers/chroot. When you install software to /gnu/store through guix install, you don’t have to reboot either, which is nice. When you do guix system reconfigure to upgrade system packages or system services, shepherd (Guix init system) will restart them.

I think Guix overall has a more technically elegant solution for managing software, but Silverblue is worse-is-better and more mainstream. I think for an ephemeral development environment, guix shell has advantages over toolbox, but it might really depend on your scenario. I think Silverblue will have better container support out of the box, so if you work with containers, Silverblue will be easier to get started with. As of this writing, Guix only supports an old version of docker. Separately I tried packaging podman for Guix. It took a couple hours on a Sunday and I was able to run an alpine image without sudo. But that might not be an option for everyone unless you are comfortable picking up Guile Scheme and rolling your own packages. With Guix, you will have more luck packaging software than trying to compile something outside of the packaging system due to the nonstandard paths.

systemd has a larger ‘compatibility list’ than GNU shepherd, and I feel you are more likely to find yourself in a “Sadly Outta Luck” situation using Guix than you would with Silverblue. If you prefer to use free software, I think Guix is a better fit due to the focus on it and aversion to software telemetry. I was thrown off a bit when Silverblue asked me if I wanted to connect a social media account during the install process. Thankfully it allows you to skip that step, but I could never imagine Guix having a prompt like that.

Long story short, while I could imagine installing Fedora Silverblue on a workstation for work, I think Guix might be a better fit for me on my personal machine where I enjoy the practice of system crafting.